Third Gender Recognition : Tamil Transgender women in the forefront and their pioneering work

The day before the 63rd Independence day of India. The golden day when the first seed for legal recognition of India’s third gender people was sown. The venue was Madras Judicial Academy.

It was an important day when the some of the highest Judicial Authorities gathered in the Chennai, the capital of Tamilnadu state. Department of Social Welfare of the Tamilnadu government, Madras High Court, Tamilnadu State Legal Services Authority,National Legal Services Authority and the Madras Judicial Academy joined hands and organised the SEMINAR ON ISSUES RELATED TO TRANSGENDER COMMUNITY. This was the first event when the highest judiciary of India could hear the transgender community’s dilemma in person, face to face, heart to heart. This was the event that tore open for the truths to bare all, the event that sensitized the some of the country’s greatest change makers. 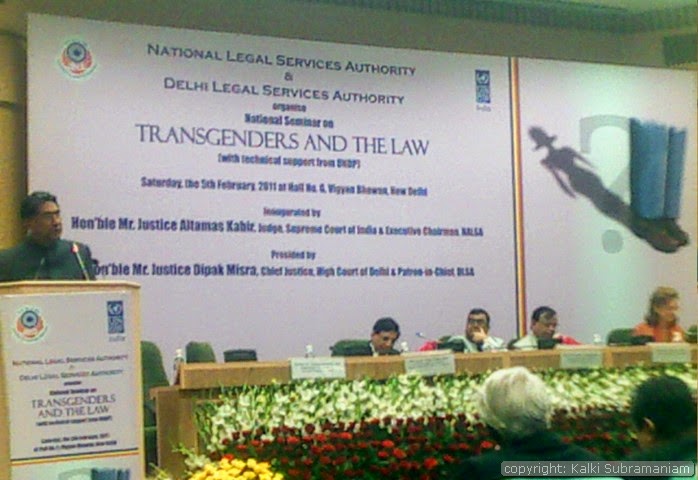 Once the protocol speeches were over, it was time for us, the transgender community to speak. I, as a representative of the community, I had been waiting for this great opportunity to present the problems faced by the transgender people.  I was on the dias sitting opposite the Honourable Chief Justice of the Supreme Court Altamas Kabir giving him an emotional speech supported by a powerpoint presentation on the problems faced by the transgender people of India. I started from childhood, teenage and went to speak to the Judge about what dilemma and terror we faced in schools as transgender kids, the bullying, the harassment, the lack of understanding and counseling support, the life in fear and depression at such an young age.  I spoke to the Judges in detail about the discriminations faced by us in the public, the lack of education that has ultimately resulted the community to resort to begging and sex work. Abandoned by family and becoming beggars and sex workers, all our dreams crashed, we become unwanted people in the society.

Activist Priyababu spoke in detail about the possible solutions for the problems faced by the community, senior activist Noori and community voices Noorjahan and Selvi also spoke about the problems transgender women face in the society.

This was the first event in the Indian history when the transgender community could directly speak in detail about our problems to the country’s Supreme court Judges who were the members of National Legal Services Authority (NALSA).

After this event, on 4th February 2011 National Legal Services Authority with technical support from United Nations Development Program organized a National Seminar at Vigyan Bhavan in New Delhi. The Seminar was titled ‘Transgender and the Law’. This was the first National seminar that discussed the legal rights and recognizing the third gender people of India.

Hundreds of Judges from all over India, including some of the prominent supreme court, high court and district court Judges were present in the event. The highest ranking Police officers from all over the country were also present in the event. It was a historical day in the transgender rights movement. Along with Honourable Justice Altamas Kabir sir who was also the Executive Chairman of NALSA, were other eminent Judges like the Chief Justice of the Madras High Court M.Y.Iqbal, New Delhi High Court Chief Justice Deepak Mishra and Justice Vikramajit Sen. UNDP Country Director Caitley Weisen was present at the event as well.

As activists and transgender community representatives, I and Priyababu were the two people from the South of India who were there to do presentations and deliver speeches to sensitize the officials. From the North were Gauri Sawant, Laxmi Narayan Tripati and Sabeena Francis.

The highlight of this seminar was the speeches and presentations by the transgender activists which aimed to sensitize the Judiciary on the problems of the transgender people of India whose life can only see ray of hope and an equal life like any other citizen of the country. After the protocol speeches by the chief guests and the hosts of the event, the Judges and Police officerrs were requested to be seated in two different halls. It was time for us to speak. I and Priyababu were in one hall and Lakshmi Natrayan Tripati, Gauri Sawant and Sabeena was in the other speaking, answering and interacting with the Judges on the transgender people’s life in India. I was sitting next to Cheif Justice sir, a very noble and kind person. He was listening to me very carefully and during his speech I could see how much of a deep understanding he has on the transgender issue.

Lawyer Laya Medhini from Article 39, Dr. Venkatesh Chakrapani, Akila Das from CFAR, Ernest Noronha from UNDP and Sonal Mehta were some of the people who were present there. Ernest Noronha’s amazing background work on the transgender rights issue is notable here. Working in UNDP, transgender rights has been one of the key issues close to his heart and he has contributed tremendously for the community’s legalisation and empowerment in a big way through UNDP.

Following this seminar,  a number of meetings and seminars were organised by State Legal Services Authorities of various states. I spoke at the Maharashtra State Legal Services Authority’s seminar and  at the seminar organized by Guahati University in Assam. I was invited by the Indian Judicial Academy and once again met Judiciary from all over the country and spoke infront of them insisting the very importance of legalising our gender and procuring our rights. I also spoke at the Jindal Global School of Law on the same issue stressing on acknowledging our rights as citizens of this country.

Activist Jeeva spoke at the State Judicial meeting at Raichur and at Hyderabad, Olga and Bharati Kannamma also spoke at various meetings. At the district level Judicial meetings, Sangeetha spoke at Coimbatore, Kajol at Trichy and Viji at Tuticorin did their best to take the issue in front of the Judiciary and voiced for social justice and legal recognition for transgender people.

Akkai did the work in Karnataka following in the steps of her predecessors like Pamela and Revathi, Seetha and Rudhra Chetri did it at New Delhi, Ranjita Sinha and Amitava Sarkar did fabulous work in West Bengal. There were a number of activists from other states who did similar work with passion for determination for our rights and recognition.


The result of this great hard work by transgender women in sensitizing the Judiciary of India and advocating for our rights finally reaped its results. NALSA filed a Social Jutice Litigation with the Supreme Court of India in 2013. The case was known as NALSA v/s Union of India. After almost an year and a half, on 15th April 2014 the Supreme Court of India recognised transgender people legally. It also directed the state and central government to take proactive measures.

For almost a decade, UNDP has done tremendous ground work and has supported in our battle towards legal recognition of the third gender.

From Priyababu filing a PIL in Madras High Court in 2005 for voting rights, Revathi bringing the first book revealing the transgender people's life in our own voice, to Swapna Karthik fighting in the court for the rights of  transgender people to enter into civil services, it is an indisputable fact that the Indian transgender movement’s battle for legal recognition started in Tamilnadu. I say it with great pride that the Tamil transwomen have contributed largely and powerfully by voicing for the community’s rights and taking actions in the right direction in our country. Certainly, the legal recognition of third gender would have not have been possible with out the immense contribution of Transwomen from Tamilnadu.

April 15th, the day the third gender people were recognized legally in India, should be announced as National Transgender day. Jai Hind!

Support Sahodari Foundation's initiatives. Please visit www.sahodari.org to know all our work for the transgender community.

Posted by Kalki Subramaniam at 9:09 AM