Rights of Transgender Persons Bill 2015 - another victory, another hope.


Today, on the 24th of April 2015, another historical victory has been achieved by the transgender people of India after the Supreme court judgement legally recognizing transgenders last year. A private bill moved in the Rajya Sabha by the Dravida Munnetra Kazhagam MP Tiruchi Siva, the ‘Rights of Transgender Persons bill-2014’ has been passed today. 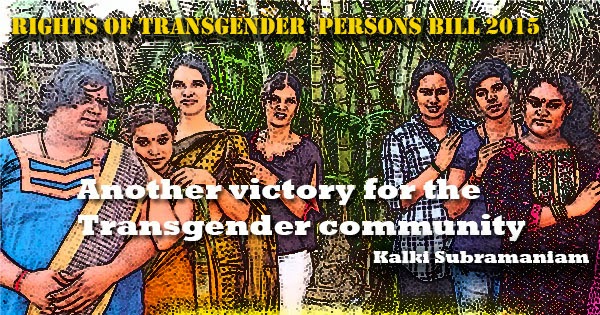 After 1970, 45 years later, this bill is the first private member bill passed by the House, a historic thing indeed.

I am extremely happy and express my sincere thanks to the member of the Rajya Sabha Mr.Tiruchi Siva and all the other Rajya sabha members for unanimously supporting and passing the Transgender rights Bill.
The members have supported inspite of the political differences. The transgender community has, for over a century, lived in the the most marginalized space in the society. Our relentless battle still continues. The supreme court judgement last year recognizing transgenders and  transgender rights bill passed in the Rajya Sabha, both have given us big hopes in our struggling life. We have believe that there is a possibility for betterment in transgender people's lives which will ensure equality and justice for us. We hope that the bill will also be unanimously supported and passed at the Lok Sabha and made into a law for protecting us.

The passing of the bill ensures that the transgender persons' rights and wellness and insists on proactive measures to be initiated by the Central and the State governments for the welfare of the transgender community in the country. I hope and wish the central government and all the state governments will implement social security and upliftment measures for us with a long term vision.

I am also thankful to the RBI for its announcement today in which it has directed all the banks in the country to include third gender in its application forms.This is indeed another noteworthy announcement which will facilitate access to banking services for the transgender people for the first time.

It is a proud moment for all if us activists and I sincerely thank our alleys, human rights activists and organizations, academicians, lawyers and the Judiciary, and all the media houses and journalists who have relentlessly voiced and supported for our issue and our upliftment from the social shackles and stigma.

This day will go into history and we are all a part of it.

Posted by Kalki Subramaniam at 9:26 AM No comments: